From informal trader to owner and manager of a mine

Mr Kwizera Bosco, 35 years old, started trading small manufactured products in Kunganzo centre, in Ngororero district (located within Gatumba historic concession) at the age of 16. In 2007, he started buying minerals illegally from the concession and other sites in the country to sell them to Kigalis’ illegal processing entities. He continued trading illegal minerals for ten years and was arrested several times. Mr Kwizera stated “I was making benefits regardless of the negative impact caused to the environment and informal miners’ health and safety. I was also not contributing to any local peoples’ livelihoods and not paying taxes”.

Realising the dangers and risks of informal mining and illegal trading, Mr. Kwizera decided to formalise his activities. In July 2018, he bought an ITSCI mine site known as DUMAC in Rwamagana district as the former owner failed to manage the site. Since that period, a total of $110,000 have been invested in equipment and site restructuration. The site is currently well established and employ around 120 people working in a safe environment with adequate OHS and PPE standards. ITSCI provided guidance and advice on traceability procedures and safety measures during site visits and through workshops in Eastern province.

Grateful for ITSCI’s support, Mr Kwizera stated “There is nothing more peaceful than working formally. This improvement would not have been possible without the significant contribution of ITSCI through different advice provided during the visits and tags available for my minerals. We thank ITSCI for its helpful support, other miners and I will always be thankful.” 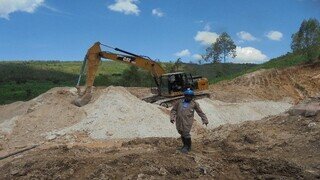 Kwizera supervising the mine