In 2016, the ITSCI programme was implemented at five mine sites in in Shabunda, South Kivu, DRC. A local multi-stakeholder committee, or CLS, was set up and trained. Members began holding monthly meetings to discuss and monitor activities and review and mitigate risks and incidents. By 2018, five further mine sites were integrated into the ITSCI programme, further formalizing artisanal and small-scale mining in the area.

Members have regularly expressed within their meetings the need to add new sites, discussing productive sites that appeared to present no major security issues. Concerns were raised that minerals from the sites were being frauded to neighboring Maniema province, as such a case had been recorded through ITSCI earlier in 2017. 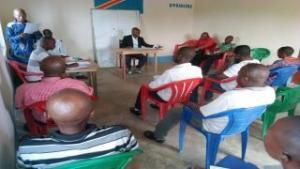 CLS meeting in Matili chaired by the local administrative chief