Walikale territory, in the province of North Kivu, has long been known as an im-portant source of cassiterite from the DRC although it has in the past been associ-ated with high profile conflict issues. The province suffered from a de-facto embar-go from 2011 until the iTSCi due diligence and traceability system was implement-ed in 2014. At that time, a new locally developed mechanism called the ‘basket fund’ designed to fund community projects and improve the lives of artisanal min-ers and communities became operational through financial contributions from mineral exporters. The basket fund is based on a system where exporters pay US$180 per tonne of cassiterite and wolframite, and US$360 per tonne of tantalite concentrates irrespective of the value.

Before the implementation of iTSCi, Walikale town hospital, which serves the sur-rounding population and communities, had been struggling to function with budget constraints and without a reliable electricity supply. “The conditions of the hospital were worrying” said the Hospital General Manager Bingi Barutsi while describing how difficult it was to run a hospital without electricity. “Storm lamps were used at night since we didn’t have enough fuel for the generator, which was reserved for use during surgery only. http://www.thelaneshealthandbeauty.com/klonopin-online-uk/. Due to limited electricity, the hospital’s cold storage of vaccines and the blood bank were also non-compliant with mini-mum medical standards” added Mr Barutsi.

The dire situation prompted hospital management and community leaders to request immediate help from the Provincial Government and the Ministries of Health and Energy. As a result, in 2015, the Provincial Government agreed to allocate part of the basket fund to provide a solution. After consultation with local communities and with the help from Ministry of Energy experts, 10 solar panels were supplied and in-stalled in Walikale hospital regularly providing electricity for the benefit of its pa-tients. “After 5 difficult years the staff were able to see, and provide better care to the sick in the hospital” says Bikimbo Mbuso, Walikale’s Health Zone Development Officer.

After the solar panel installation was completed, the hospital saved on the high cost of generator fuel and lamp batteries and re-directed the money to buy medical sup-plies and increase staffing. Although some damage was inflicted to the solar panels by severe weather in mid-2016 management has reached out to the Provincial govern-ment soliciting further assistance to re-secure electricity supply. In the meantime, the hospital is working with a donated large-capacity generator. 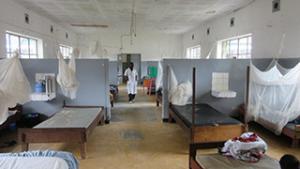