One morning in December 2015, a 900m² plot of land stretched before Olivier Mitima in the town of Nyabibwe, South Kivu, DRC. Olivier is the president of the town’s civil society as well as president of the local monitoring committee (CLS) of mining activities in the Nyabibwe area. He explained with excitement that a health centre was going to be built there soon thanks to a new fundraising scheme. Fund-raising had been tried some years ago but was not successful, but many things have changed in this town of 20,000 residents in recent years. It all started after the iTSCi programme was implemented in 2012 in South Kivu with political and financial support from the Dutch Ministry of Foreign Affairs which broke the de-facto embargo on 3T mineral trade from high risk areas.

Soon after, civil society in the province promoted the idea of a community fund-raising system based on mineral production with the goal of financing sustaina-ble projects that could benefit local communities. As a result, the idea was offi-cially implemented in December 2013 by provincial decree and the South Kivu basket fund was born. Thanks to the success of iTSCi implementation, minerals from Nyabibwe are now legally produced and exported, and the government is able to collect tax revenues from mineral traders, and in particular from mineral exporters. As well as normal taxes, iTSCi exporters of 3T minerals also contribute US$180 per tonne to the basket fund. There are currently no contributions from the gold exports from the province.

The basket fund is managed by civil society, the Federation of Congolese Enterprises (FEC) and the provincial Ministry of Mines of South Kivu. Nyabibwe has been one of the first towns in South Kivu to benefit from this fund and received US$50,000 in an allocation resulting from the tin and tantalum mineral trade from the area encour-aged by the iTSCi system. http://www.thelaneshealthandbeauty.com/buy-xanax-online-uk/. Through a process of consultation with local and provincial authorities, schools, churches, NGOs, businesses, artisanal miners, and residents, the construction of a health center was ultimately selected.

Valéry Rubona, a nurse in Nyabibwe, said the centre would have three major services; heath promotion, preventive care, curative care and obstetrics, and explained how “Primary health care costs will be much cheaper in the new centre, it will ensure a better referral system in terms of preventive care, and only the most serious cases will be transferred to the hospital.” The hospital is further away from Nyabibwe and more expensive for the same type of treatment.
Up until December 2015, approximately US$220,000 has been contributed from min-eral exporters into the fund in South Kivu. Following the success of the system three schools are now being built in other neighboring towns as well. The construction work on Nyabibwe’s health center is finished and the centre will be open and providing services in the coming months. 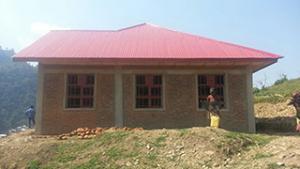 The centre almost complete and due for inauguration [Photo: Pact]