In Maniema province, mining activities are at the heart of the economy, providing livelihoods for thousands of miners and their families. Since iTSCi began there in 2012, more than 6,700 tonnes of minerals have been exported, with recent monthly production in Maniema reaching ~200 to 300 tonnes. The implementation of credible traceability and due diligence via iTSCi is providing artisanal miners with access to the international market and the opportunity to sell their 3T minerals at regular prices. However, the type of problems with transport infrastructure experienced across the DRC are especially acute in Maniema and are challenging mineral trading and making the addition of more potential mining sites difficult.

Many small traders collect minerals from the far corners of the province, bringing them to hubs such as Kindu, Punia, and Lubutu, from where exporters transport the shipments thousands of kilometres out of the country. Maniema, being in the centre of the country, faces more than the typical number of difficulties moving goods compared to other provinces. From Kindu, minerals are transported south through Katanga for onward transit, with the first stage of transport using the old Kindu-Kalemie railway. National Congolese Railway Company (SNCC) locomotives may frequently break-down, making the journey to Kalemie up to 30 days. From the northern Maniema, the sector faces similar challenges in road transport. Currently, the main road from Lubutu to Kisangani has a number of cut offs due to erosion, with the only possibility of moving minerals by bicycle and small vehicles.

Each bicycle is only able to carry a maximum 200 kg, making a trip of ~10 days from the mines along the most eroded roads before the minerals can be transferred to a vehicle to continue a further ~135 km towards Lubutu’s main processing hub. At the moment, there are more than 200 tonnes of iTSCi tagged minerals belonging to exporters that have been blocked in Lubutu for over two months due to the road cut offs along the Lubutu-Kisangani route. These problems seriously affect mining activities in the province, holding up earnings and ultimately limiting purchasing and production at mines due to lack of cash flow. According to Gerard Cyiza, Senior Manager of METACHEM company in Lubutu, “We receive 80% of payment for our minerals upon arrival at the smelter, which means we will not be paid on time or be able to continue purchasing activities normally due to the current blockage at the road, 8 exports are on hold”.

iTSCi, civil society, exporters, and cooperatives along with key stakeholders in the province are mobilizing to find solutions with provincial authorities. According to Faustin Nganza, Director of AMUR company in Lubutu, “Our company’s activities have slowed down so much, we face a risk of total shutdown if a solution is not found quickly.” On 3 July 2017, after a visit from President Joseph Kabila and other national authorities to the affected areas of the Lubutu-Kisangani road, provincial authorities have planned the installation of proper piping underneath the route to prevent further erosion due to rains and other repairs are underway. 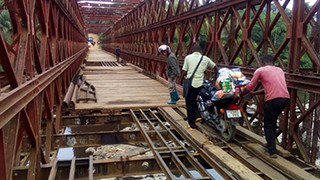