After the decline in activity during the 2015 political crisis in Burundi, recent developments in the mining sector are much more positive. Implementation of iTSCi has enabled 3T minerals to access the international market as part of a responsible supply chain, and the government of Burundi has been improving management of mining activities, which has accelerated progress in the sector. The establishment of the Oﬃce Burundais des Mines (OBM) in 2016 and the de-centralisation of state services are helping business in Burundi to grow. Fraudulent activities can of course still occur on site, or along transport routes, and when identified, these issues are dealt with by all actors working hand-in-hand to prevent illegal activity undermining the chance for the sector to reach its full potential to contribute to the country’s economic growth.

For example, important work was carried out by the national intelligence services of Burundi who started investigations around Gisozi mine after allegations of suspicious activities. The investigations revealed that the cooperative manager was trying to smuggle wolframite across the border due to its proximity, as well as the greater financial certainty offered by buyers elsewhere. At the suspect’s house the police found counterfeit money (US dollars and Burundian francs), 27 bags of mineral with iTSCi tags and 15 empty bags, also with tags. The suspect planned to take wolframite-filled bags with iTSCi tags from Gisozi to his destination, then, pierce the bags and empty the contents, and later, refill the bags at Gisozi with the same weight, sow the bags shut, and repeat the operation designed to fool checks along the route that verify minerals are tagged.

After collaborating with iTSCi teams for verification of events and information, OBM gathered the stolen minerals for storage at their headquarters. iTSCi also ensured that tags were properly retrieved and handled. Legal proceedings were undertaken and the accused was sentenced to three years’ imprisonment and a fine of approximately US$29,000. While the cooperative manager is now in prison, the minerals seized by OBM remain in their facilities with no international agreement on how they may be disposed of according to the OECD due diligence guidance. The lack of a method to properly treat seized minerals continues to frustrate stakeholders on the ground.

According to Edmond Bigendako, Director of Operations at the OBM, “The investigation and recent arrests of fraudsters are the direct result of OBM’s awareness-raising eﬀorts as well as the increased allotment of resources into combating illicit activities.” As a result, police and OBM have noted a remarkable decrease in fraudulent activities. This improvement is also supported by the increasing number of cooperatives that are integrated in the iTSCi programme and who can mine and responsibly trade their minerals without resorting to illegal activity. 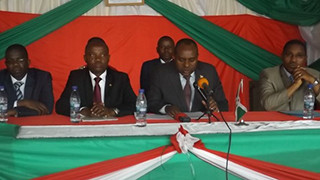