Shabunda is the second largest territory in the province of South Kivu, with a reputation for rich mineral deposits, and locally believed to possess significant amounts of tin, tantalum and gold. The territory is also very remote, leaving it more vulnerable to security issues, however, following a period of armed-group activity in recent years, peace and security is now returning to many areas. After careful evaluation of the situation, as well as official government validation, five 3T mine sites were integrated into the iTSCi programme in autumn of 2016, and according to Nfundiko Murula, a negociant operating in the territory “The conditions of 3T mining operations have improved day-to-day since the arrival of iTSCi in Shabunda.”

Unfortunately a ‘gold rush’ in Shabunda in the last three years reportedly benefit-ed armed groups by around US$25,000 per month, and led to questions over taxation and lost revenues from that mineral. It has therefore been positive to observe that since iTSCi was established in the territory, many artisanal gold miners appear to be switching to cassiterite due to good market prices and the availability of cash flow from regular buyers. Nfundiko continued to explain that “Before iTSCi, miners preferred gold because of its high sales price, but now that tagged cassiterite obtains a good price and mines are secure, more and more miners are coming to our sites”.

Through the combination of slightly improving tin market prices, and the more significant effect of the introduction of iTSCi, cassiterite prices at mine sites increased four-fold, from around US$2 to US$6 in a short period in August 2016. Producing cassiterite is easier, cheaper, and faster than gold. According to Jean Muhimuzi, a gold miner who recently switched to tin, “The methods used for mining gold are more complicated, one is forced to buy mercury, which is expensive and hazardous to use.” Cassiterite ores are in contrast processed by physical means, using only water, and prices have continued to improve, reaching an all-time high of US$9 in recent months for best grade when competition for mineral has been high.

According to another miner, Lukundu Witanene, “In an intense week’s work of mining 3T, a small team can produce maybe 100 to 200kg of minerals and sale proceeds regularly, meaning we can save money, and receive loans from negociants due to the reliability of production”. In contrast, despite gold having a much higher trading price, gold miners can work for a week and earning nothing. “Only those who have expensive and heavy machinery earn better in gold mining. Gold miners are also more likely to be subject to harassment by state services and see their gold confiscated, while nobody stops, or arrests a miner with tagged cassiterite” added Lukundu. Cases of taxation or other problems in 3T are likely to be reported through whistleblowing or other means and mitigated via the iTSCi incident system.

Nfundiko recognises however that “There are still difficulties to be resolved.” Transportation of minerals from remote sites to export points is one of the toughest challenges the sector faces, given the large size of the territory and very poor infrastructure; minerals tend to be flown to Bukavu since this is the only realistic current transport option. Nevertheless, local stakeholder groups aim to find more solutions, hoping to expand business 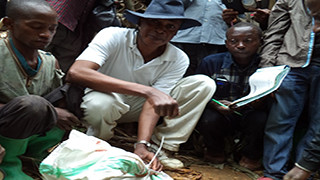