In 2015, the Democratic Republic of the Congo went through a restructuring process of its administrative and political boundaries, sub-dividing many existing provinces into a total of 26, as opposed to the previous 11. As part of this process, Katanga was divided into four new provinces; Haut-Lomami, Haut-Katanga, Tan-ganyika, and Lualaba. New administrations were formed in the new provinces, and the entire process was finalized with the election of governors for each of the newly-formed provinces in April 2016. As a result, iTSCi needed to adapt and sub-divide our own structures, including four new Provincial Steering Committees (Comités Provinciaux de Pilotage) or CPPs, for each province. The CPPs are established under Ministerial Regulation of the Provincial Government with facilitation from iTSCi and our field staff, and are a crucial way to engage local stakeholders in due diligence and appropriate mitigation of risks as recommended in the OECD guidance, as well as finding solutions to other challenges.

The committees are composed of many diverse stakeholders, such as representatives of the Service for Assistance and Organisation of Artisanal and Small-Scale Mining (SAESSCAM), civil society, traders, exporters, Mines Division, National Intelligence Agency, Mines Police, and other state security forces, and benefit from having the Provincial Minister of Mines as its President. Aside from receiving information on iTSCi procedures and incidents, CPP members are trained on due diligence, risk management, and the Voluntary Principles on Security and Human Rights (VPSHRs). The VPSHRs were established with the goal of guiding and encouraging companies to ensure safety, security, and respect for human rights in their operations.

“These trainings for our committee have become very important tools, enabling us to properly carry out our role and support stakeholders all along the supply chain” said Mr. Tshizaing, the President of Lualaba’s CPP at the closing of a due diligence and VPSHRs training in July 2017. After its creation on 8th August 2016, the Lualaba provincial committee has held three meetings where members discussed the general situation of mining activities in the province. One of the key components of these meetings is the identification of risks and mitigation measures by members to resolve and prevent incidents. Incidents can range from illegal collection of taxes by state armed forces on transport routes, to continuous errors in handling tags or filling out records by SAESSCAM agents at mining sites. One challenge Lualaba’s CPP now faces, is organizing its meetings promptly and regularly, given the members’ different schedules and priori-ties.

Nevertheless, with ongoing follow-up and training by the iTSCi field teams, their members are progressively recognizing the crucial role they play in safeguarding responsible supply chains from their province. As Mr. Thizaing stated, “These efforts also help us realize the importance of our committee and its actions to promote the value of artisanal mining and its potential for growing commercialization of conflict-free minerals.” 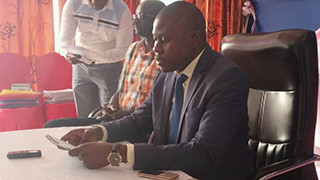 Provincial Minister and President of CPP Tanganyika at a Due Diligence and VPHSR training, July 2017 [Photo: Pact]