A day in the life of an iTSCi field coordinator

Fabrice Muhire joined iTSCi as a Field Oﬃcer in 2013. Having previously worked as a Field Manager for the Rwanda Natural Resources Authority, Fabrice was eager to join a leading international project like iTSCi, with a new and transformative vision for the mining sector. He is part of the iTSCi team on the ground in Rwanda carrying out daily follow-up of traceability and due diligence activities. As part of his responsibilities, he covers six districts, visits around 35 mining companies per month, and conducts baseline studies at mine sites to report circumstances relating to Annex II of the OECD Due Diligence Guidance so mines can be considered for integration in the system. Fabrice checks for non-involvement of security forces, respect for human rights, absence of the worst forms of child labour, as well as noting what realistic production volumes can be expected.

After Fabrice’s reports are approved by the iTSCi Governance Committee, the mine becomes part of the iTSCi system and the responsible government agent is allocated the appropriate number of tags for the expected production levels. Fabrice then continues to regularly visit to ensure that expected Annex II conditions are main-tained, to support the government agents, and report any potential issues that might affect the supply chain. He is currently responsible for following up at 105 mine sites. “People used to think there are no minerals in Rwanda, that they all come from neighboring countries, but this isn’t true” says Fabrice “I see miners producing minerals every day.”

In March 2017, there were 893 mine sites in iTSCi Rwanda, but only 213 were active. The mining sector is very dynamic and mines may be open for only a short while, meaning that the iTSCi field team need to constantly report new information to accurately reflect the latest reality on the ground. When he started working with iTSCi, Fabrice faced different challenges. “I would sometimes be confused on how to estimate the production capabilities of a mine, and, entering small tunnels to assess the origin of the production was difficult” explained Fabrice. “Collaborating with some company managers at concessions was not an easy task either” he added.

However, Fabrice explained to company managers that the goal is to increase credibility in Rwandan mining, so ensure access to the international market, and bring invest-ment. Some were reluctant at first ,but now they understand and are cooperative. “With our continuous visits, stakeholders feel more involved in decision-making processes, which encourages them to improve operations and prevent incidents” says Fabrice. While infrastructure is generally better in Rwanda compared to some countries, mines are located in remote areas, and staff need to climb hills by foot to reach them. “Proper planning and good knowledge of the locations of the mines is indispensable” says Fabrice. Staff numbers have increased as more mines have been added but workload continues to be a challenge due to the dynamism of the sector and the number of incidents being recorded. However, thanks to improved support and teamwork, continuous training, and guidance, Fabrice is confident in his work with our government partners. 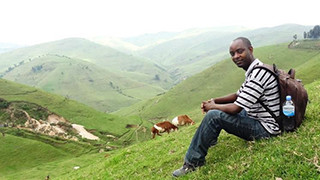