A new home for the mine authorities

Beside a 20 year old 40-square-meter wooden building, the provincial director of the North Kivu Mines Division, Emmanuel Dimubanze talks about where he and many of his 52 agents used to carry out their work to manage the minerals sec-tor across the Province of North Kivu – poor facilities in cramped offices with a leaky roof and unsuitable working conditions. Building a new office, however, had not been a straightforward proposition. Mr Dimubanze struggled to find funding before the solution came via the local basket fund financed through mineral export fees. While created in 2012, this basket fund for development projects only became operational after the launch of the iTSCi system in March 2014 which helped facilitate exports of minerals not associated with conflict or human rights abuses.

Old building housing the Mines Division in Goma, from 1997 to 2015 [Photo: Pact]
iTSCi was first launched at the Société Minière de Bisinzu tantalite mine in Ruba-ya and that company has been contributing to the fund for more than three years. In 2016 the extension of iTSCi led to more cassiterite business, and in total around 180 tonnes of minerals were produced each month that year, for which exporters contributed in addition to their normal taxes and export fees US$180 per tonne of cassiterite and wolframite, and US$360 per tonne of tantalite con-centrate exported. The basket fund is managed by the Governor of North Kivu, who provides direction for the use of the fund and authorises projects together with the Provincial Minister of Mines, the Federation of Congolese Enterprises (FEC) or the Director of the Mines Division.

After sufficient funds were collected, the Governor and stakeholders allocated US$258,000 and construction of a new building began. On the 3rd December 2015 this first new office building of the authorities since the independence of the DRC was officially inaugurated during ‘Mining Day’. This has allowed the agents and manage-ment of the Mines Division to work more effectively, in better conditions, and to have adequate space for meetings. The Mines Division represents the National Ministry of Mines in each province, coordinating and supervising mining activities at the provin-cial and local level, and also works with the governor in all matters linked to mining, including for the delivery of trader and miner cards. Within the iTSCi programme, agents of the Mines Division are important partners who are responsible for tagging and recording data in trading centres, delivering mineral transport authorisations, and checking receipt of minerals at exporters.

A second phase of construction is planned to add two more floors to house all other mining agencies in Goma (SAESSCAM, CEEC and Mining Cadastre). This will enhance coordination between the agencies and also bring about improved performance. A geological museum displaying samples of the different rocks and minerals found in the province will also highlight the abundant mineral diversity and resources in North Kivu. Other past and possible future projects of the minerals exports basket fund in-clude the construction of bridges, rehabilitation of mineral transport roads, and providing solar energy to a hospital. 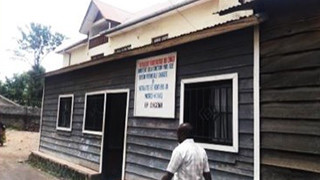