Burundi – new opportunities after a crisis

The 3T mineral sector in Burundi has faced many challenges, and, limited by lack of ﬁnancing and political difficulties, has never reached its potential. However, the government and mineral companies have fought to establish responsible supply of 3T’s and the future now looks much brighter for 2017. The iTSCi Programme and the Burundian Ministry of Energy and Mines (MEM) decided to work together in 2011, but it was only in 2014 that investment from companies and the govern-ment itself enabled field operations and training for traceability to begin. The part-ners made significant progress and in 2015, after one year of iTSCi implementa-tion, 34 mines and all exporters authorized to operate in the country were mem-bers of the programme. However, the political crisis that unfolded around the re-election of President Pierre Nkurunziza’s in April 2015 was the greatest challenge so far and nearly led to the closure of iTSCi in Burundi.

Preparation of site to start exploitation of minerals at Kidunduri site [Photo: Pact]
Many important companies in the 3T mining sector suspended operations in the country in May 2015, whilst only three exporters remained. As a result, the market dried up and many mines also suspended their activities. More than 30% of mines were inactive and production was extremely low, reducing industry funding for essential support work. However, thanks to funding from the Dutch Ministry of Foreign Affairs (DMFA), and contributions from some CFSI members, activities were able to continue. “Without the additional support from DMFA, we would have had to close the office. Production was so low that it couldn’t finance the pro-ject and we had to let most of our staff go”, recalled Jean-Baptiste Sabukwigura, iTSCi team leader in Burundi.

During the crisis, iTSCi continued to train MEM field agents, organized about 100 visits to mine sites and exporters to closely check the security situation, discussed the situa-tion with government entities and continued to manage tags and collect data. In 2016, investors started to come back to Burundi and in July 2016, a new buying house (Burundi Mineral Exports BME) started activities. “We decided to launch activities in Burundi because security was improving”, explained Dieudonné Ndayikeje, BME Oper-ations Manager in Burundi. “Since then, we have made 11 exports”.
For Pascal Nyandwi, manager of Kidunduri mine, this was the long-awaited signal that activities could resume. “Kidunduri mine entered iTSCi programme in October 2014 but had to close in May 2015 because no one was buying our production. The mine reo-pened in October 2016”. For him and many others there is no doubt: iTSCi’s work dur-ing the crisis minimized the impact on the 3T mining sectors credibility in Burundi.
Continuity of the work of MEM and iTSCi during the crisis has allowed increasing quan-tities of wolframite, tantalite and cassiterite to now become available from Burundi as improved security, investment and production provides new opportunity for 2017. 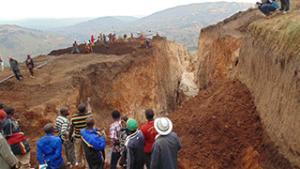 Preparation of site to start exploitation of minerals at Kidunduri site [Photo: Pact]