André Nduwabandi is married and has 10 children. He is the oldest of all the miners in Nyagatobo II mine, located in the Bubanza province of Burundi, and has been working there since informal mining activities started at the site five years ago. Nyagatobo II’s minerals are “hard to reach and production is low” according to André who continued to mine despite these challenges as well as other concerns; “Before ITSCI, we used to work secretly and we were always afraid that the police would find us and that we would get arrested”. However, since the site was recognized and recently added to the iTSCi programme, the mine and the newly formed cooperative have had an increase in visibility and opportunity.

The mining cooperative Coopérative Minière de Rugazi (COMIRU) was formed in April 2016 and mining activities in Nyagatobo II were recognized by the Government allowing the iTSCi programme to be implemented. Fraudulent activities have been significantly reduced, and trust and transparency between the miners, police, and traders have increased significantly. Agents from the Burundian Ministry of Energy and Mines (MEM) visit André and his team to provide technical advice on mine safety as well as carry out tagging to ensure traceability. “With ITSCI, when we pass police checkpoints while transporting our tagged and recorded minerals, there isn’t any suspicion” says Gabriel Nikobamye, the head of COMIRU.

Income has also increased since the mine has been included in the iTSCi programme. According to Gabriel, “Now, we sell our minerals to the highest bidder! Before, our minerals were bought at really low prices, and we were not in a position to turn them down.”
With recognized and formalized small-scale mining, prosperity for the community has started to blossom as well. Just ask Anastasie Nirera, the owner of a restaurant near the mine site. She sells a plate of beans and rice for 500 Burundian Francs (0.3 US$) to the miners that come on their breaks for a meal and some rest from the sun. She says, “Miners would not work consistently in the mine, they would come and go, and I could not work or earn as much. Now that the mine is official, miners spend their 8 hours or more in the pits, so they are eating regularly at my restaurant.”

André, Gabriel, and Anastasie only hope that with the positive benefits of iTSCi, production, along with their income, will increase and they will be able to provide for their families and reap the benefits of their hard- earned work. 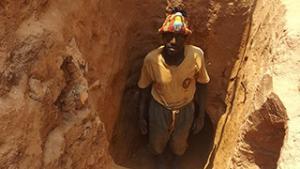 André standing in one of the Nyagatobo II mine’s pits [Photo: Pact]