Better livelihoods thanks to formalised mining

Like many others growing up in Busoro, Innocent Sibomana’s family was large and faced with the challenges of poverty; his father had two wives and there were 12 children in the family. Innocent described his situation in the earlier years of his life; “I dropped out of primary school at a very early age to help on the farm, but since my parents were not able to feed the family due to lack of land, I decided to join illegal miners instead of engaging in alcoholism and drugs.” Cooperatives in the Rwandan mining sector were not well organised and many activities were carried out illegally.

Innocent explained how “ we were illegally mining on someone else’s land. We were considered thieves and so illegal buyers were only paying us very low prices for the minerals. Some of the illegal miners died due to working in risky tunnels without safety measures.” At that time, production was unpredictable and because of the illegal activities, the minerals were sold to unknown buyers.

”Things changed in the beginning of 2011, when the mine worked by the Cooperative Miniere de Nyamyumba Busoro (COMINYABU) became part of the iTSCi programme. Activities became well organised and more people were employed. I was among the first workers to be officially employed, since even though I was poor, I had experience. I worked hard and was promoted to team leader and later to site manager. Now, I earn US$150 per month, paid through the microfinance bank, and have access to loans” said Innocent.

Thanks to the iTSCi system, the cooperative can sell its minerals to the international market at fair prices, creating a source of income for miners such as Innocent and their communities. The progress in formalization of mining in Rwanda has also improved safety and security in the area. According to Innocent, “now, I can work in safe conditions with health insurance and proper mining equipment.”

Income from formalized mining has allowed Innocent to buy a motorbike for transportation, plots of land for his parents and for himself, and to build his own house. Thanks to his acquired experience, Innocent is also providing consulting work to other nearby mining companies. He is recognized in his community as a hard-working man and an active contributor to local development. “I have finally found my way; today my life is better than ever” said Innocent Sibomana. 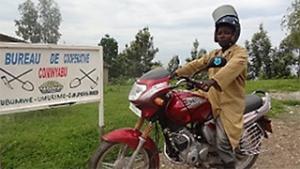