Imagine a small town in a lush green landscape with two mighty rivers running through it. Residents – farmers, nurses, children, merchants, mothers, miners, teachers – all going about their daily business. The town is called Bihambwe, located in North Kivu province in the Democratic Republic of the Congo.

Like any other town, rush hour can be a stressful time of day, but the people of Bihambwe faced particular challenges. The Mumba and Mema rivers flowing through the town had no bridge or any type of infrastructure connecting opposite banks. The town was effectively cut off from roads and cities such as Goma, capital of North Kivu which was limiting many kinds of socio-economic opportunities.

Hope Yese Kireka runs one of Bihambe’s schools and explained that “before the construction of the two bridges, the population suffered a lot. We had to pay to travel by piggyback on young men to cross the rivers. We had many cases of drowning, especially children, but also our cows, goats, sheep, and pigs”. Local hospitals and health centres were supported with medical provisions from civil society groups, but the sick and injured were also transported on someone’s back to reach the other side of the river to hospital. Farmers and miners trans-ported their goods to trade and sell outside of town with great difficulty, de-pressing production and income for the area.

After the implementation of the iTSCi programme in North Kivu province in 2014 to support responsible trade in tin, tantalum, and tungsten minerals, local government and communities were able to raise more revenue from contributions from mineral exporters and reinvest it back into the community through a locally managed basket fund. The Bihambwe community and the North Kivu provincial government decided to allocate over 400,000 US$ from their basket fund to build two bridges over the Mumba and Mema rivers. Bihambwe Bridge was inaugurated in July 2015 and Mema Bridge in May 2016.

Now, thanks to the increasing mineral trading activities as a result of the introduction of the iTSCi programme in the province, Bihambwe’s residents can cross the rivers safely, minerals and other goods can be transported and traded rapidly, and flood control has been improved. “The construction of the two bridges was a sigh of relief for us moto-taxi bikers. Before, customers were scarce since they had to walk and then take the moto-taxi on the other side of the river. Now, we have plenty of customers and more earnings than ever” said Eric Nsabimana, a Bihambwe resident. Similar basket fund initiatives have also succeeded in South Kivu province, where they have helped build schools and health centres for the benefit of the communities. 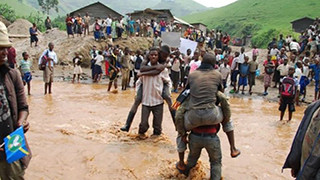 Bihambwe’s residents crossing the Mumba River before revenue from mineral trade funding the construction of a bridge [Photo: Pact]