Before the iTSCi programme was implemented across the Great Lakes Region, the extraction of tin, tantalum, and tungsten (3Ts) ore was characterized by high levels of fraud with little monitoring of prices, taxes or other activities taking place in the mines, at trading points, and along transport routes. Lubero Territory of North Kivu province in the DRC was typical of an area which lacked support, had been suffering a de-facto embargo for several years, and where even illegal mineral trading was suppressed. iTSCi worked to find upstream funding to support the start of iTSCi in the area, and after a long wait for the official validation of sites, 6 mines were integrated into the iTSCi system in 2015.

Following the implementation of iTSCi, transparency and adherence to local laws in the artisanal mining sector improved, and according to Patrick Kamabale, an agent from the Mines Division, “since the implementation of the system, we recognize that there has been a sharp decrease in fraudulent activities and corresponding improvement in our performance… which has not been the case for other types of mineral production such as gold and diamonds”.

However, during 2015 international tin prices were already declining steeply and reached a low point in January 2016. Tin prices on the London Metal Exchange (LME) dropped from 20,000 US$ to only 13,000 US$ per tonne, well below the cost of production in many parts of the world. The fall was part of a general crash in commodity prices which also impacted other minerals like tantalum, tungsten and copper, as well as other commodities like oil.

The crash in prices weighed heavily on the mineral sector and has been detrimental to the livelihoods of artisanal miners and companies across the region. Production at iTSCi sites during this period decreased significantly by 30 or 40% and remained persistently low due to international market trends. Miners have been discouraged and complain there is little profit to be made in mining due to the cascading effects of low prices and lack of capital and pre-financing to buy minerals at competitive prices. Business in Lubero was particularly badly affected as the mining sector did not have time to become re-established and sustainable before facing these challenges. “Before, there were more resources for mineral purchases, and now with the prices going down, it’s more difficult to make a profit,” said Buma, a miner in the area.

Lack of legitimate opportunity for miners and pits remaining empty can lead to negative social impacts; increased unemployment can cause alcohol abuse and other neg-ative activities to become pervasive. According to Elongo Tambwe, a member of Lubero’s civil society group, “with the arrival of iTSCi and mineral tagging, most fraudu-lent and illegal activities in Lubero’s mining sector were stopped. Now with the international price fall and miners leaving the pits, we pray that iTSCi will be the voice of artisanal miners and that the system will carry on with its positive activities”. 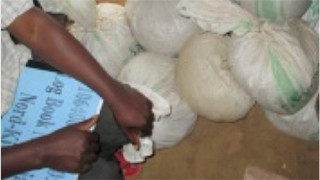 Traceable minerals waiting to be sold in Lubero [Photo: Pact]