A successful business grows from traceability

The owner of SEAVMC (Société d’Extraction Achat et Vente des Minerais et Carrières), Mr. Emmanuel Nyabyenda, started working in the mining sector in 2008. He slowly built up his company, and now has over fifteen mine sites allocated to him by the Rwandan Government.

According to Mr. Nyabyenda, the introduction of mineral trace-ability in 2011 has had major impact on the mining sector in general and on his company in particular: “Before the iTSCi Scheme it was very hard for us miners to monitor activities in the mines or to secure enough production. A lot of fraud was occurring on the company premises and we couldn’t control the clandestine mineral flows. But with the traceability system, everything has changed”.

First, according to Mr Nyabyenda, traceability procedures al-lowed companies to better organize their work. The logbooks which must be systematically completed have made it possible to account for every kilo of minerals that is produced. He be-lieves that the system has also helped to fight against fraud. In past years, minerals were bought and sold without knowing their origins but everything at the comptoir must be totally clear and must correspond to the tags and logbook sheets. Minerals cannot circulate in Rwanda without being tagged. Thus the whole chain is controlled from mine to export.

On a personal level, thanks to the traceability system, Mr Nyabyenda has considerably developed his company and pro-vided more jobs to people. The company has been able to pur-chase its own excavators in order to prepare its mine sites. These mechanized operations have tripled production in the past four years. The excavator works not only for the SEAVMC position to have their own machines. The number of workers at all sites increased from 100 before iTSCi traceability scheme to 420 workers.

Since the start of the traceability scheme, the company has also started to employ staff with higher education levels because with the system, they need skilled staff who can understand, control and follow up the production records. Where before the staff were all working as miners, SEAVMC has now four employees with a university degree and this number will increase soon as the production and the company is still growing. 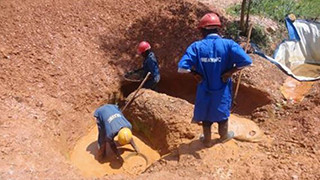 Thanks to the iTSCi scheme, now 420 miners work at Seavmc, with equip-ment and security protection