A young mother is enabled to provide for her family

Naomi Mwilambwe survived the war which en-gulfed the DRC until 2002 but was abandoned by her husband with three small children to look after. After a failed small business venture she went to work washing minerals in the mines. Today she is providing her children with a better life.

This is her story.

Originally from Kolwezi, Naomi came to Manono, Katanga province, in May 1999. Little did she know that the rebellion which had started in the east of the country was about to reach Manono, throwing her life into chaos and uncertainty. As a result, she was unable to complete her studies. In the crisis following the war, in 2002 she met and married a man named Louis. She had three children with him but five years later he abandoned her, leaving her without work, nor resources to raise the children. Thanks to a loan from her sister in Lubumbashi, she began a small business selling donuts and bread rolls but it quickly became apparent that this was not enough to cover the family’s daily needs. Fate seemed to be directing her to the mines.

Her entry into the mines came about one morning when she asked a friend of hers, an artisanal miner, to help her out with a little bit of money to buy soap. He gave her 500 Congolese francs, but realising that Naomi would need more than that to take care of her family, he suggested that she try working in the mine site, at the mineral washing facility. Naomi soon found herself in the sector of Djibende, in Manono, washing loads of mineralised sand in order to extract the cassiterite (tin ore). In the beginning, Noami found the work hard but she stuck with it for the sake of her children.

Now 29 years old and mother of four, Naomi uses the $4-$5 she earns per day to pay her children’s school fees. In 2008, Naomi took the decision to go back to school herself while continuing to work in the mine site in the mornings and, two years later, she obtained her State diploma. Naomi believes the iTSCi project has brought positive benefits to all the mine workers. Before the arrival of iTSCi, one comptoir had a monopoly in the site, and the artisanal miners received a much lower price for their cassiterite. A small tomatoe puree tin full of minerals (around 300g) used to earn 500 – 700 Congolese francs (about 55-75 US cents) but is now worth four times that.

With these increased earnings, Naomi managed to generate savings and has started purchasing roofing materials to build her own home. As Naomi tells it “abandoned by my husband, this work has enabled me to take care of my four children, aged 10, 8, 6 and 2, without help from anyone. Now with iTSCI, everyone is pulling through, we’ve seen our standard of living rise. With the extra money I make, I’ve been able to reorganise my life”. 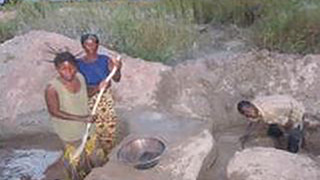 Naomi at work washing minerals in the mine of Djibende