In Numbi, management of ITSCI tags was a point of tension and suspicion. The concession owner SAKIMA, the mining company AMUR and the local cooperative COPAMIHANUBU were on one side, and state technical services SAEMAPE and Divimines were on the other. The presence of various mine sites, some with off-take agreements such as with SAKIMA and AMUR, and others without, created recurrent issues among mining stakeholders and state services, the former regularly accusing the latter of a lack of transparency in handling ITSCI materials.

To reestablish confidence between stakeholders and implementing partners, ITSCI spearheaded joint tag management using lockboxes, building off the system’s successful implementation in neighboring North Kivu province. Despite long-lasting rejections, ITSCI did not give up, instead sensitizing the state agents on the advantages and positive impacts elsewhere. These efforts paid off. In November 2019, SAEMAPE, Divimines, and SAKIMA signed an agreement and began using the procedures after ITSCI trained 24 relevant stakeholders. ITSCI materials have since been stored in two metal lockboxes with three padlocks each, located in SAEMAPE and Divimines’ local offices, covering a total of 10 mine sites. 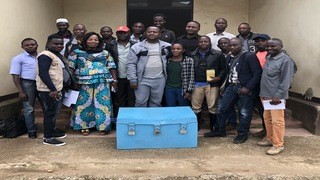