In the Pangi territory, the benefits of the ITSCI programme have transformed a decades-long local conflict. Since 1975, the Nbizu, Ngozi and Kayeye clans have been in a protracted land dispute. The clans disagreed about the boundaries between each community’s land in the forest surrounding their homes. The stakes were high because the land has ancestral significance, and the clans struggled to trace and differentiate between their minerals, exacerbating the conflict. However, since 2013, the clans have gradually been integrated into the ITSCI programme.

ITSCI tags have provided the communities with tools to resolve disputes over land and mining taking place within the forests. By requiring consistent, ongoing monitored statistics for each site, ITSCI has enabled the clans to distinguish between their respective production. Participation in the ITSCI programme has resulted in considerable benefits to each community. 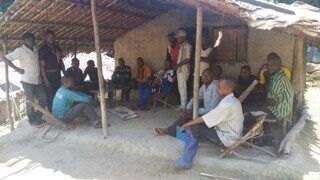 Meeting between COMINGOZI and COMINZI cooperatives and state agents and representatives