In 2015, the United Nations established the Sustainable Development Goals (SDGs), composed of 17 goals aimed to be achieved by 2030. Under Goal 8, which promotes decent work and economic growth for all, target 8.7 calls for an end to child labour worldwide by 2025.

ITSCI and RMB are ﬁrmly on track toward eliminating child labour in Rwanda through their awareness campaign. RMB Mineral Field Oﬃcer Mr. Niyimpa Olivier stated that children between 8 and 16 have been found at abandoned sites. Children’s activities in the mines can be mentally, socially, and physically harmful.

In March 2019, ITSCI and RMB held an awareness raising day at Groupe Scolaire Kamwambi under the auspice of the director of the school. Nine hundred primary and secondary students and 40 teachers attended. 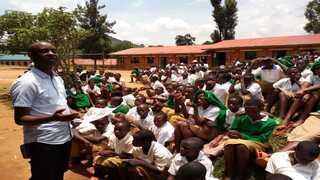