ITSCI brings conflict free status and trade to Kasese mine

In 2015, conflict broke out between two cooperatives at the Kasese mine, which led to the death of two people and the involvement of the Forces Armées de la République Démocratique du Congo (FARDC) (Armed forces of DRC) to control and secure the mine site favoured towards one cooperative.

Pact/ITSCI staff recorded the issue as an ITSCI incident. As part of the incident resolution, ITSCI facilitated the setup of a local multi-stakeholder committee at the Kasese site. The committee launched in June 2017, with all relevant stakeholders included, among them the cooperative, the landowner, state services, local authorities, negociants, civil society and public security forces.

Several visits by Pact/ITSCI to explain the importance and benefits of adhering to ITSCI and due diligence were conducted. All members of the committee, including the president of the cooperative working at Kasese and the FARDC Commander supervising the area, subsequently agreed to sign a commitment to respect OECD due diligence guidance and ITSCI procedures, including not allowing FARDC to intervene in mining activities. 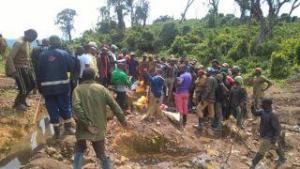 Sensitisation on ITSCI and due diligence at Kasese site