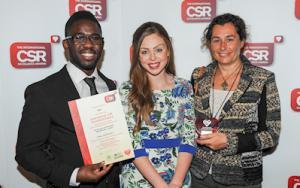 The iTSCi programme continues to win awards for its outstanding contribution to sustainable supply chain management. Already recognised in January as a key contributor to ITRI being named edie Sustainability Leader 2017, iTSCi has now won an International CSR Excellence Award, presented at the UK Houses of Parliament.

International CSR Excellence Awards are presented by the Green Organisation for Corporate and Social Responsibility to caring companies that use their privileged position to help their colleagues, communities, customers, the environment and the less fortunate.

The award recognised iTSCi achievement in the Socio-Economic Sector. By pioneering due diligence and minerals traceability in Central Africa, iTSCi has clearly demonstrated improvements to the economic security and quality of life for thousands of mining families. The programme has also provided a platform for community projects managed by NGO partner Pact.

Commenting on the award the CSR judges said: “The iTSCi programme reaches into remote parts of Africa and enables small-scale miners to break the link to funding rebel-armed groups; improve their infrastructure and reduce the reliance on child labour. It is an ambitious project that has made very significant progress.”