While iTSCi focuses on the implementation of due diligence for the avoidance of conflict and human rights issues, the traceability and risk management systems which have been put in place have many other benefits, with one such benefit being the possibility to help protect the national parks of the DRC. One of the many field checks that are regularly made by iTSCi staff is to ensure that minerals are not being mined in protected areas and this has resulted in some positive changes in Katanga region. The Upemba National Park is close to the 3T mining areas of Bukama territory in Katanga and iTSCi has had cause to open a series of field incident reports since 2012 recording the involvement of park rangers in mining, as well as other illegal activities within the park itself. However, through the iTSCi facilitated local multi-stakeholder committees (CLS’s), iTSCi has brought visi-bility and coordinated action on this issue.

The entrance to Lusinga Station, Upenba [Photo: geobobford.com]
The CLS’s have helped to achieve resolution to many field incidents recorded by iTSCi, bringing about transfers and disciplinary actions against the park rangers involved in mining, arrests of those mining illegally in the national park, and suspension of ‘tax’ surcharge applied by the mining regulatory authorities on minerals produced in the park. Most recently, work of the stakeholders has achieved the withdrawal of miners at least 10 km away from the park boundary in Kyenze mining sub-sector. By the end of 2016, all stakeholders, including iTSCi, mining regulatory authorities, and even park rangers confirmed mining must be confined to legal mining concessions.

While this is a positive outcome, conflicting legislation and imprecise cartography mean continued follow-up is necessary by iTSCi. Park rangers claim Kyenze’s concession overlaps with park boundaries, despite the site having been validated as ‘green’ by the DRC government. Park rangers also claimed there was a 50 km buffer zone beyond the park in which no mining is allowed. While national environmental law does stipulate the presence of buffer zones, it simply requires that activities within them, including mining, be regulated to avoid environmental damage to nearby protected areas. If these buffer zones are overregulated, it could encourage illicit activities and fraud, dilute regulatory enforcement, and negatively impact opportunities for mining communities. iTSCi is therefore using this as an opportunity to galvanize its government partners to reach agreement and bring clarity to this issue. 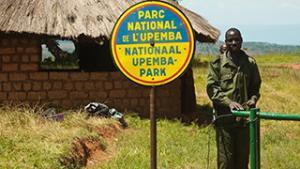