Encouraging children away from work at mines

In the DRC, in common with other artisanal mining areas around the world, children can be drawn into extraction, crushing, washing and transportation of minerals, often to help their families with income, pay for school fees, or cover their basic needs.

Although the effects of mining on a child’s health, development, and wellbeing are detrimental, and therefore defined by the International Labour Organization as one of the worst forms of child labour (WFCL), the challenge to improve the situation is a complex and practical one that requires innovative action. The presence of child labour in mines was a problem in Manono, DRC, particularly in the areas immediately around the main town which has a long history of min-ing. Understanding the complexities of the issue, a project was designed called Watoto Inje ya Mungoti (WIM) or Children Out of Mining.

The WIM project put the child at the centre of activities and built outward, involving immediate family and friends, schools and neighbourhood committees, local authorities, industry and the provincial government. “WIM is our project, a project of excellence!“ said Faustin Kyungu, aged 15. “At first, I didn’t think I should leave the mines, but through WIM’s awareness raising and activities, I understood that my place was not in the pits but on a school bench. After that, I quickly returned to school”. Faustin used to be a miner; he is now third in his class at the Nsilwilo School in Manono, formerly part of what was known as Katanga province, in the DRC.

Awareness-raising on WFCL and positive parenting skills training have been key to the success of WIM, which, in only one year, reached over 4,100 beneficiaries, including 1,881 children, resulted in child labour bans at 23 mine sites and contributed to the reduction in the number of children working in the areas mines by 89%. Radio broad-casts, signage, song and dance, and football tournaments are some examples of WIM’s holistic approach, leveraging social, cultural, and artistic opportunities. “After the arri-val of WIM, we witnessed a huge behavioural change in the community and from the parents of the children working in the mines” said François Kazembe, the Territorial Administrator of Manono.

Due to the difficult economic conditions in Manono, including the presence of many vulnerable children who lack family security, the risk that children will return to the mines remains. This is especially the case in the current extraordinary times of low commodity prices. There is a clear need to ensure a continuity of the work WIM accomplished and to enlarge its scope – more partners and funding are sought to scale-up and expand the project’s successes. 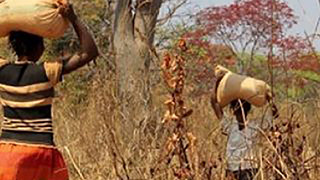