Some insecurity persists in the Great Lakes Region and security services play an important role in protecting communities, mining areas and transport routes and maintaining the law, including to help legitimate trade to grow. At the same time, security forces should act responsibly and according to proper procedures and companies who work with public or private security services can help spread good practice. The OECD Due Diligence Guidance recommends that companies who contract public or private security forces do so in accordance with the Voluntary Principles on Security and Human Rights (VP’s). The VP’s are a set of principles established in the year 2000, with the goal of guiding and encouraging companies in the extractive sector to ensure safety, security, and respect for human rights in their operations.

Training events being held for key stakeholders as part of the Scaling Up Mineral Traceability (iTSCi) in the Great Lakes Region project (funded by the Dutch Minis-try of Foreign Affairs) are helping to promote the VP’s within the due diligence framework of the iTSCi system. The guiding principles cover interactions between companies and public security forces such as police or military (who may be as-sisting in safe transport of explosives), and private security forces (who may be em-ployed to protect depots), and explain how to identify and manage risks. Thanks to this training, participants can better identify, prevent, report, and resolve human rights abuses, as well as integrate them into due diligence efforts within iTSCi.

The Local Provincial Committees (Comités Provinciaux de Suivi – CPS) which are set-up and facilitated by the iTSCi Programme are a very important part of the multi-stakeholder consultation and risk mitigation process in the DRC. CPS members in-clude provincial government, mineral companies, public and private security provid-ers and civil society representatives, and the groups meet regularly to discuss im-portant issues in the mineral sector. The existence of these groups can be utilized in many ways, and in this example, have eagerly participated in the training which helps to strengthen good governance in the mineral sector and the region.

Since 2015, three trainings for a total of 90 participants have been carried out in the cities of Goma, Bukavu, and Kindu. ”Where have you been all this time?” David Kalon-da, the extractives advisor to the Governor of Maniema Province, said to Pact’s staff while they were providing this new training made possible by the Scaling Up project. Mr Kalonda is a key member of Maniema’s CPS and was a participant of a VP’s train-ing on 8th April 2016 in Kindu, capital of Maniema Province, DRC. “Thank you for bringing us this notion, which truly helps us have a clearer vision of what we need to do” added Mr. Kalonda. 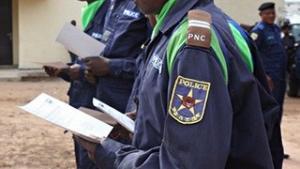 Police oﬃcers participate in other training programmes in the DRC [Photo Stephanie Dunga/DfID, published in The Guardian]